Saigon most haunted places from apartments to museums

Flat 727 on Tran Hung Dao street, back in the 60 was the tallest building in Saigon. It was built by a wealthy businessman for US soldiers accommodation. The building have 13 stories in total and was divided into 6 parts with 530 rooms opened for business, it was named a millions dollar apartment at the time. Now however, several parts of the building have been abandoned for a long time and was much degraded compare to its former glory.

Come with its glamorous past, flat 727 also been rumored to be haunted. Due to the building’s design to have the number 13 as its stories, many people believed it gave the building bad luck. The 13rd floor had never been finished with numerous of accidents went along during the process. When the war ended, the Flat was still being used but said floor forever untouched.

According to Flat 727’s residents, when the night fall, the sound of squads after squads of US soldiers marching can still be heard until this day. Some say there was a tragic love story happened here a long time ago and seldom, the ghosts of a blond hair man holding a Vietnamese girl’s hand can be seen flowing through walls of the building.

That being said, what really happens in the Flat 727 and whether it is being haunted or not, is still a mystery. 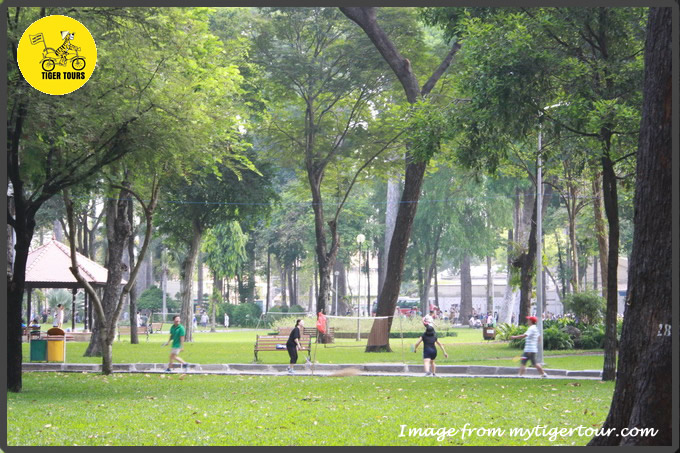 Le Thi Rieng park in the past was rumored to be a collective graveyard for falling soldiers after the historical Mau Than battle in 1968, espcially the only lake inside of the property.

People claimed to have seen all kind of ghosts, from a spirit of a four or five years old child with pale face sitting in the swings waiting for its parents to come, to a group of soldiers patrolling all around the park in the dark, unknown of the existing peace. However, there are no proves to all those sources but after several attempt of suicide in recent years in said park, the rumors have no signs of cooling down. 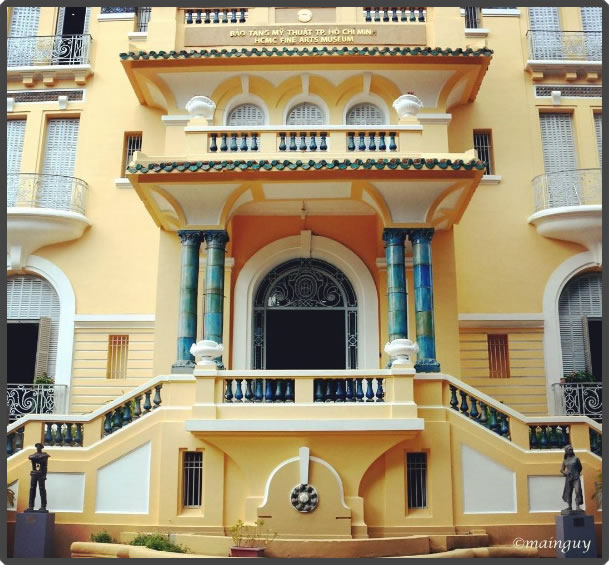 Before became Ho Chi Minh Fine Art Museum, the Hua’s mansion was one of the most mysterious and hunted place in Ho Chi Minh city.

The mansion was built and located at 97, Pho Duc Chinh street, district 1. The reason why it is rumored to be haunted is that people recalled a story about the death of Mr. Hua’s youngest daughter. It is said the daughter was very beautiful and had many suitors. Unfortunately, leprosy took her life when she was thriving to live.

According to the museum visitors, they claimed to hear somebody crying echoed through the corridors, to the youngest daughter’s old room, which was said to be locked ever since she died. Or the story about a ghost that takes shape as a young girl wearing all with wandering and floating through walls. Or the story about a panicking man running all around the mansion like he has seen gosh (maybe he did.) and the body of that man was see-through
Whether it’s true, whether it’s fail. Why don’t you find out yourself?

Cho Ray hospital can be found on Thuan Kieu street, district 5, and like any other hospital, Cho Ray hospital has a morgue. What special about this morgue is that the hospital of which it’s inside, was one of the oldest hospital in Ho Chi Minh city.

Locate deep inside of Cho Ray hospital, where most of almost untreatable patients staying, the Farewell house is never out of business. Hence, there will always be story and tales about those who die with full of thrives to live.

Some people say because of those patients die so suddenly, they’d never close their eyes and accepted the fact that they’ve already dead. And by night, they will come back looking for any reason to stay on Earth. So if you’re adventurous, definitely don’t miss this spot.

5. Thuan Kieu Apartment and a tale of the girl red cheongsam. 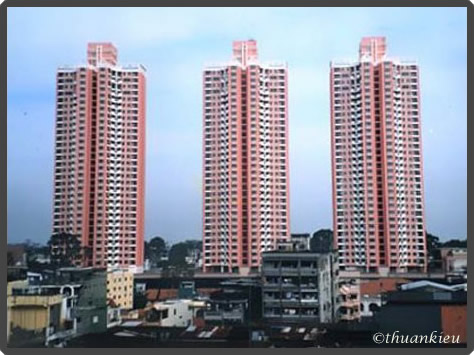 Fifteen years ago, Thuan Kieu Apartment was one of the price of old Saigon, and sharing fate with any other “price of Saigon”, it was soon be abandon.

It was said that in the process of building the apartment, the designer of this building was a Chinese man and he believed in Chinese Feing Shui, a system of laws considered to govern spatial arrangement and orientation in relation to the flow of energy. and whose favorable or unfavorable effects are taken into account when siting and designing buildings. Predictably, Thuan Kieu Apartment’s Feing Shui was not good and it prevented the building to be finished. The designer then thought of a solution he was sure will be the best for the building; buried three gauss jars of three virgin girls in three corner of the construction. From then, the haunting began.

People said that five years ago, there was a lady who sold Banh Mi near the apartment and every day at six in the evening, she always saw a girl in red cheongsam wandering around with panic on her face. One evening when curiosity took hold of her, the lady decided to stop the red cheongsam girl to asked, she soon to be scared to death when she realized that the girl had no legs. Scared and passed out, when she woke up, the red cheongsam girl was nowhere to be found.

Do you believe in those stories? Would you do to those spot and looking for ghosts your self? If you would like to discover more haunted places, our Tiger Guides would be delighted if you joined us.