Popular religions and worship in Vietnam

Vietnam is officially an atheist country followed by the Communist regime. Vietnamese is considered as a peaceful and multi-religious which has adopted selectively world religion and indigenous beliefs, then developed primarily on reverence for the symbols of the gods. In spite of the freedom of religion and not too much limitations on worship, some religions are banned by the Government if they spread wrong teachings or have ideology conflicts with core value of Vietnam government.
There are 3 main religions in Vietnam with a large number of followers: Buddhism, Christianity and Cao Dai. Each religion has some different features in terms of spiritual value, ritual and worship as well as reflects different ideology via its teaching. Among three of those, Buddhism is the biggest and the most significant of which is Mahayana Buddhism.
In fact, there is a part of Vietnamese consider themselves non - religious, however some of them practice informal religious customs and folk religion, which not recognized by Vietnam Government.

Vietnamese is a multi-religious country which allow the citizen to choose and practice freely their faiths. In spite of the rich in religions, there are no many serious conflict about religious ideology. If you are interested in knowing the religions, indigenous belief of spiral life in Vietnam, this post is the exact thing you need.
Buddhism
This is the most popular religion with the largest number of followers in Vietnam, accounting for the vast majority in most provinces of Vietnam.
Buddhism is the third of the great religions which have contributed to the molding of Vietnamese culture and character over the centuries. Buddha was a contemporary of Confucius, and the religion he founded entered Vietnam from both India, Buddha's home, and China. Today it is perhaps the most visible of Vietnamese religious beliefs.
Buddhism have contributed to the molding of Vietnamese belief and culture based on "three teachings". 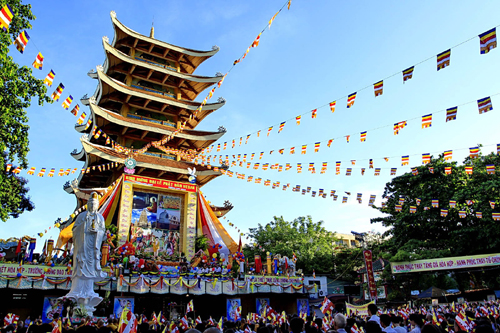 Triple religion
Three teachings is known as a theory refers to the combination of Confucianism, Taoism and Buddhism found in Chinese philosophy. In Vietnam, the three teachings have become enclosed with each other, as well as with indigenous Vietnamese beliefs. Most Vietnamese practice and synthesis suitable elements of disparate Asian religious traditions and ancestor worship. This system of beliefs is known as tam giao: triple religion. 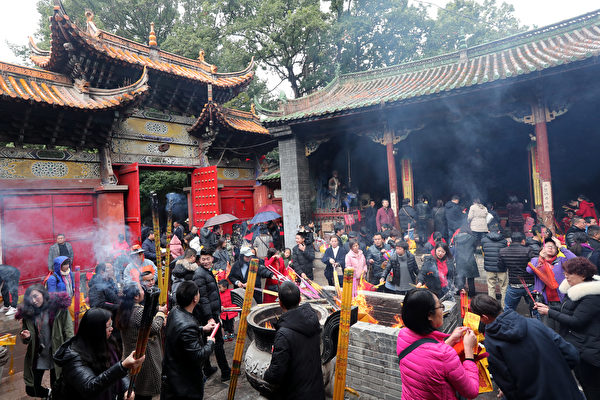 The Vietnamese worshipping at a local pagoda in Lunar new year. Source: Internet.

Buddhism emerged in Vietnam since the early 2nd century AD that origins from both India and China. From 2nd to 10th century, under the rule of Chinese, Vietnamese social culture in general and Buddhism in particular influenced deeply by Chinese culture and ideology - the Confucius and Confucian ideologies.
An important milestone of Vietnamese Buddhism History is the Buddhist crisis under Ngo Dinh Diem regime. He was a president of South Vietnam from 1955 to 1963 who determined to govern Vietnam by Catholic principles. Unequal policies for Buddhists led to rallies and hunger strikes and handing out pamphlets protesting Diem's ​​anti-Buddhist policies. In June 1963, a Buddhist monk named Thich Quang Duc set himself on fire while sitting in a meditation position in the middle of a Saigon intersection. The self-immolation image of Thich Quang Duc has become one of the most representative images of the 20th century.
There are two branches of Buddhism in Vietnam: Mahayana and Theravada. However, the ultimate goal of Buddhism is the cessation of suffering and the attainment of Nirvana. Also, Buddhism believe in a simple system of cause and effect: good deeds have good effects, and bad deeds have bad effects.
Mahayana Buddhism first came from China to the Red River Delta region of Vietnam in about 200 years and became the most popular religion in the country. It has been recognized by many people as the main religion of the Vietnamese, Chinese and some ethnic minorities living in the northern mountains such as Muong, Thai, Tay ... In fact, it has existed in harmony with Taoism, Confucianism and indigenous beliefs such as ancestor worship, mother worship ...Mahayana Buddhists work towards the enlightenment and salvation of all sentient beings.
Theravada Buddhism came from India to the south of the Mekong Delta from about 300 to 600 years and became the main religion in the southern plains of Vietnam. It is considered the main religion of the Khmer. On contrast, Theravada Buddhists believe in a search for personal enlightenment.
Three main elements of Buddhism rituals include recitation, chanting and the making of offerings. In terms of offerings, there are flower symbolising beauty and impermanence, candles, symbolising the radiance of enlightenment and incense which pervades the air in the same way that a life lived ethically touches the world. 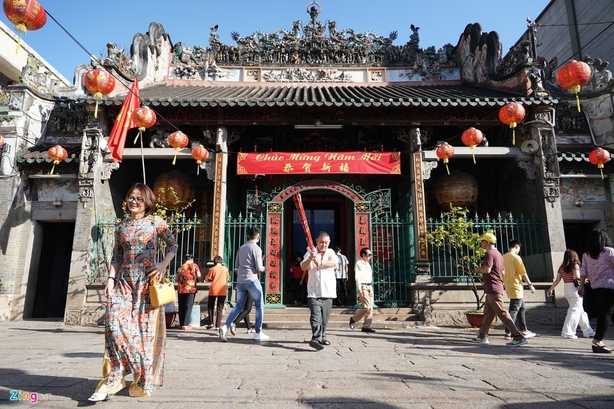 Pagoda in the Chinatown of Saigon. Source: Internet.

Joining in some major Buddhist festivals is a great option when you travel to Vietnam: Huong Pagoda Festival- one of the biggest cultural festivals in Vietnam, or Buddha Birthday Celebration.

Christianity
There are about 6.2 million Vietnamese, about 7%, were identified as Catholics,1.4 million, just under 2%, identified as Protestants and about 6,000 churches in many parts of Vietnam. 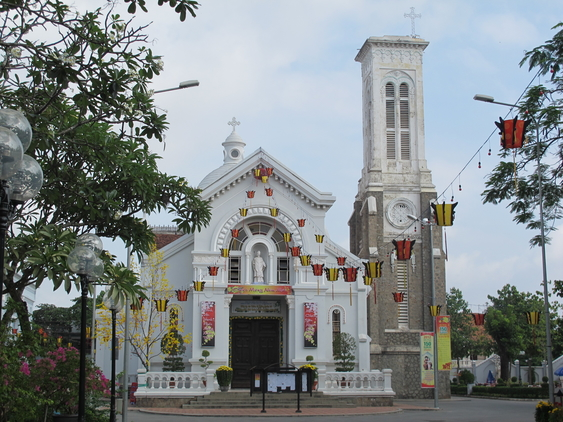 It was Spanish and Portuguese missionaries, who played a central role in bringing Catholics concepts to Vietnam by trading. Under the France Colonisation, they encouraged Vietnamese to follow a new religion with the hope that they could balance the number of followers of Buddhism and Western religion as well as influence Western culture to change Vietnamese belief which aims to rule easier.
In contrast, Protestant Christianity faith was not introduced to Vietnam until 1911 by Canadian missionary Robert A. Jaffray.
Currently, government agencies are more comfortable dealing with Christians and non-Christians in Vietnam that they can celebrate public holidays such as Easter, Thanksgiving and even organize meetings at the church.

Cao Dai
The Cao Dai religion was established in South Vietnam in 1926 by Ngo Van Chieu, Cao Quynh Cu and Pham Cong Tac, with the center Tay Ninh Holy See. This religion worships Cao Dai (or God), Buddha and Jesus. Cao Dai is a reformed Buddhism with the added principles of Confucianism, Taoism and Christianity. Caodaism followers practice such things as not killing, being honest, being harmonious, doing good, fleeing, helping around, praying, ancestor worship with the minimum goal of bringing happiness to everyone, bringing people to God in the Heavenly Yard, and to get everything out of samsara. 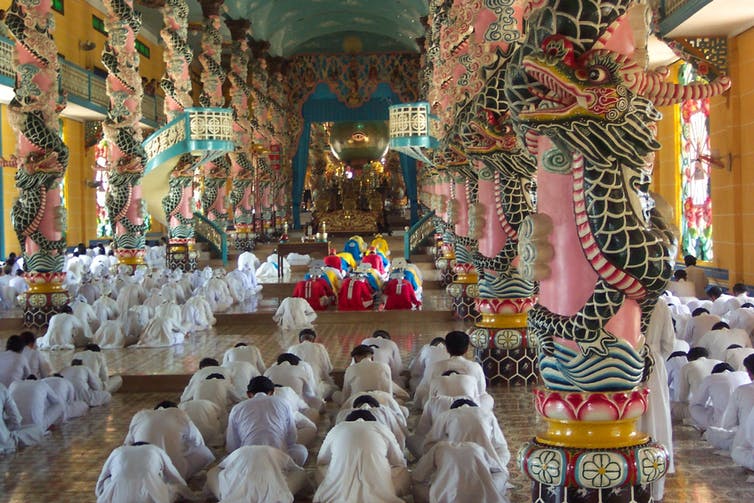 There are currently about 2.4 million Cao Dai followers in Vietnam, mainly distributed in the southern provinces. Tay Ninh province is prominent for one of the huge amount of Cao Dai followers. Besides, there are about 30,000 followers in the United States, Europe and Australia. Find more information about Cao Dai here.
Read more about Black Virgin mountain in Tay Ninh.

Vietnam is considered as a promised land for tourism which not only consists several stunning landscapes and diverse culture but also is a land of many faiths.
Travelling in Vietnam is like reading a book about how religion influence the Vietnamese lifestyle and their thinking. Vietnam is always an impeccable place for you to satisfy your excursion about tales and religions.